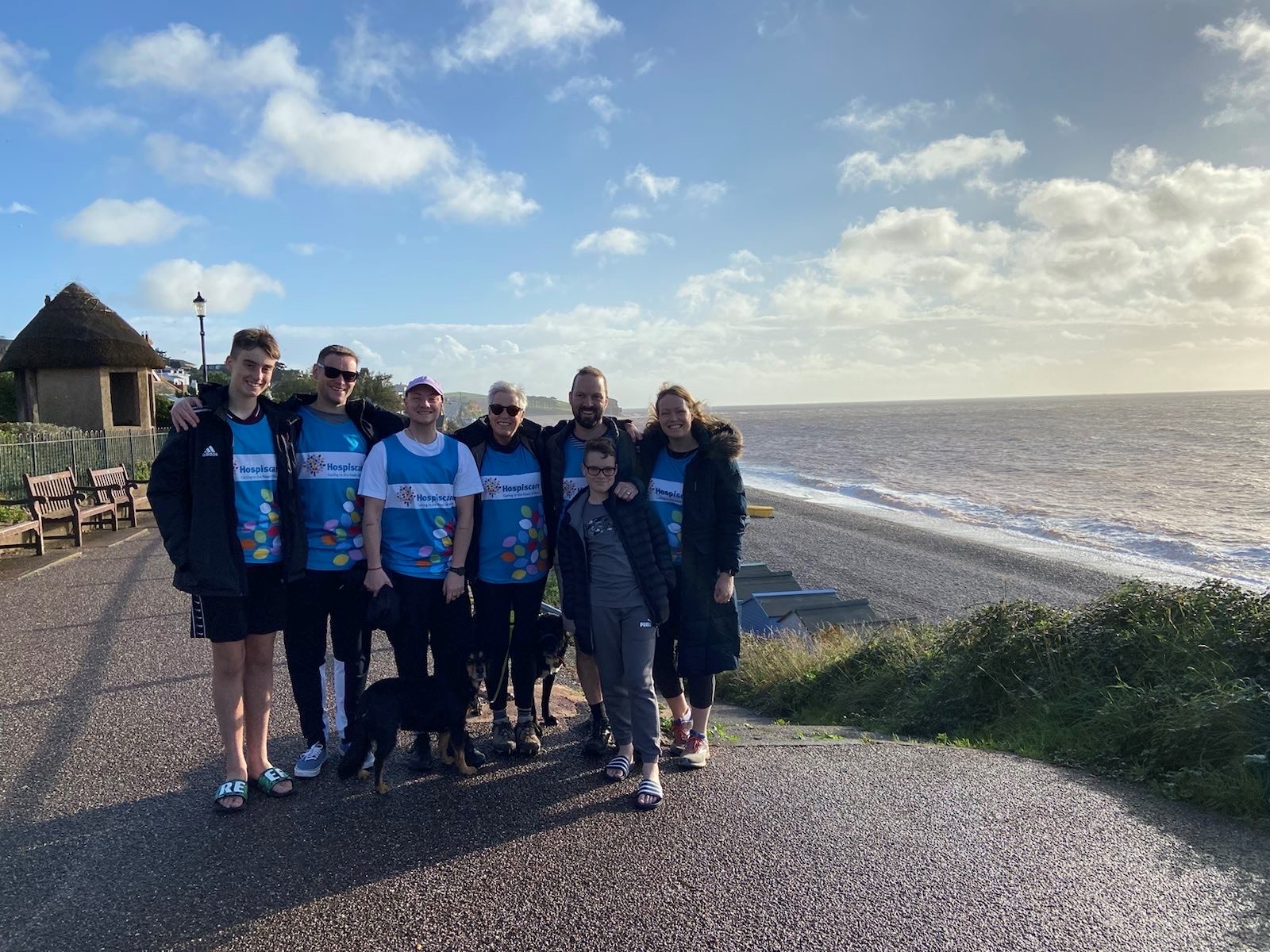 Gill Harris and her family reunited in Devon to honour a wonderful husband, father, grandfather and friend. The family travelled across the country to walk together on the anniversary of Keith’s death to remember him with a fundraising challenge to support the hospice that cared for him.

Last year, Keith was suddenly taken ill and shortly after, he was diagnosed with lung cancer and Leptomeningeal disease, a rare small cell cancer that affects the membrane around the brain.

Keith’s illness was swift and aggressive and he was admitted to hospital after having a seizure. Keith continued to suffer from seizures as he was cared for at home by the Hospiscare at Home team and later when he was admitted to the hospice.

On 24 October 2020, just weeks after falling ill, Keith died on our specialist ward in Exeter. 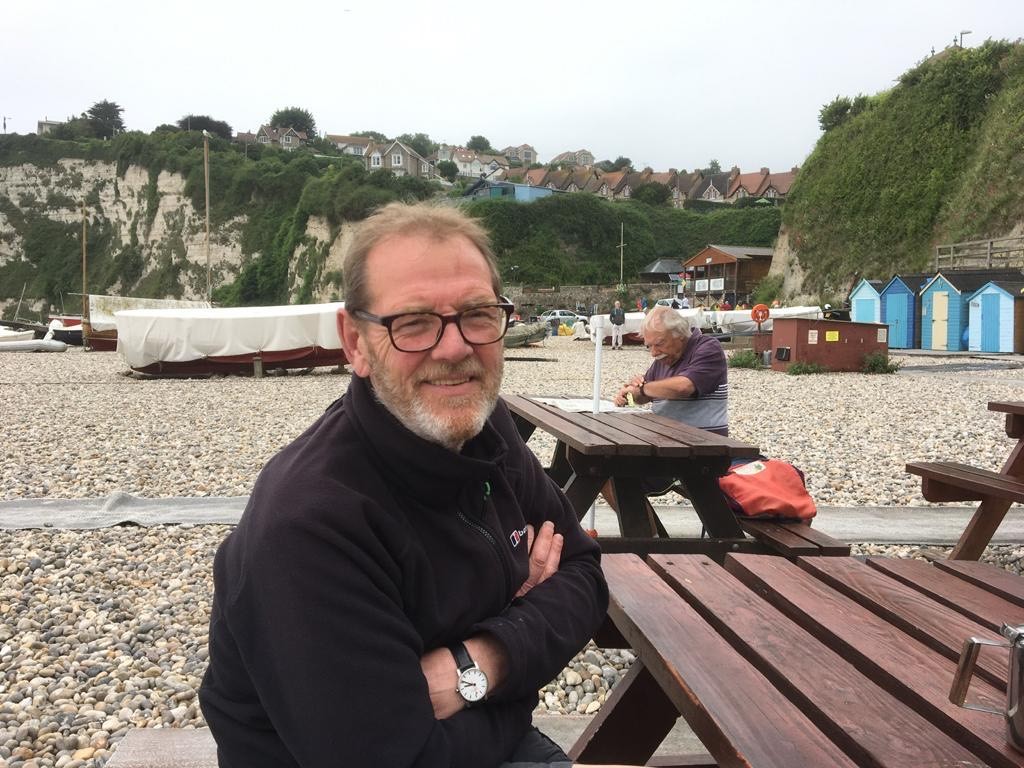 “Keith was a truly brilliant person, full of love, kindness and wisdom.”

Due to the nature of Keith’s illness, he was largely unaware of what was happening. Although the illness affected Keith’s short-term memory, his family were still able to enjoy his sense of humour and brilliant sense of fun. Keith’s wife, Gill, explains “Keith always played musical locally with various groups. One of the things that struck us about Hospiscare was that even the day before Keith died, he was playing his guitar in the hospice. It was so lovely that Hospiscare facilitated him to do all of those things he loved right up to the end.

“Thanks to the Hospiscare at Home team, Keith was able to spend his birthday at home, surrounded by his family. He played his guitar and enjoyed his favourite meal.” 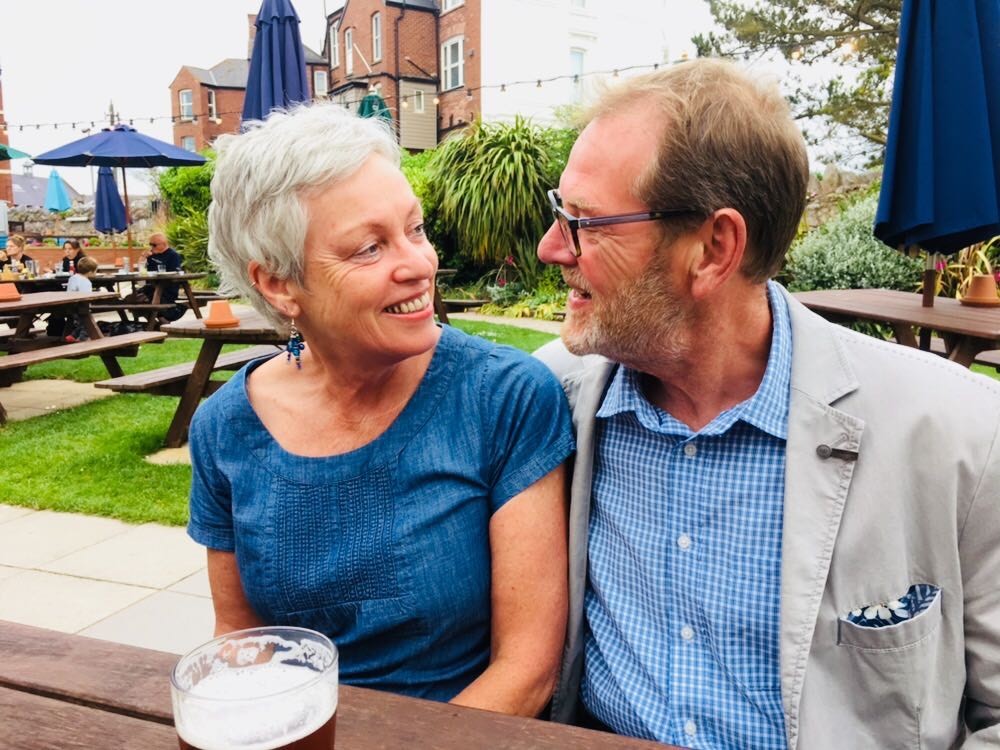 Joel, Keith’s eldest son, says “Without the nurses’ extra care, I wouldn’t have been able to have my last conversation with Dad. I phoned him on Thursday evening and he didn’t pick up. The nurses told us he was quite confused by this time and he was struggling to use his phone. One of the nurses noticed that Dad had a missed call from me and they phoned me back. Without that extra bit of care, I wouldn’t have been able to speak to Dad that last time.”

Elijah, Keith’s youngest son, says “The staff at Hospiscare cared for Dad so well, but they also cared for our whole family. They did everything to put us at ease so that we could just focus on being together.”

Ellen, Keith’s daughter, says “The staff at Searle House were truly wonderful. They all showed great compassion, care and patience towards Dad and also to us – nothing was too much trouble. Knowing that Dad was able to carry on doing the things he loved most, such as playing his guitar and having a sing-song with Des or having a cheeky beer with dinner was a real comfort to us all. We will be eternally grateful to the work that Hospiscare do and the incredible support they give.” 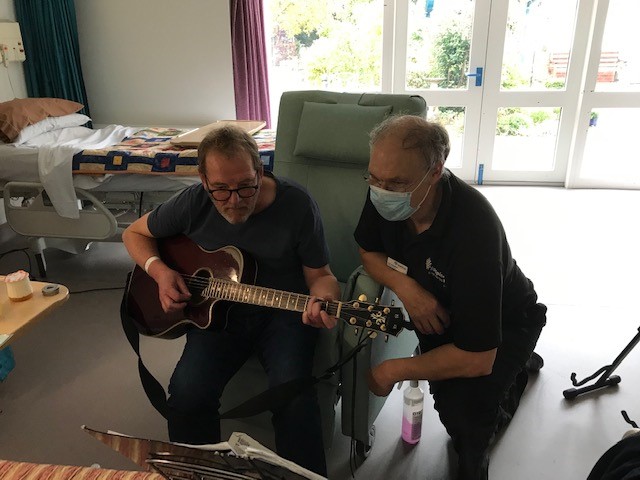 Keith playing his guitar in the hospice with Des, Hospiscare Housekeeper and keen musician

Gill continues, “We wanted to do something for the Hospiscare at Home team and the doctors and nurses on the ward who were all so wonderful. Marathon in a Month coincided with the anniversary of Keith’s death, and also his birthday on 19 October, so it just felt right to honour him in this way and get something positive out of something so devastating.

“As a family, we are still grieving, still unable to truly comprehend the loss of a man who was the most wonderful husband, father, grandad and friend. Keith was a truly brilliant person, full of love, kindness and wisdom. He was endlessly supportive of his family, friends and the local community. We will always, always miss him.”

The family decided to reunite in East Devon, where Gill lives, during the half term week to complete their Marathon in a Month challenge. It was a true reunion for the family with Gill’s children traveling from across the country to walk together in memory of Keith. Their sons, Joel and Elijah, travelled from Birmingham and London respectively. Gill and Keith’s daughter, Ellen, travelled from Leicester with her husband, Mint, their sons Harry and Ben and their dog Dexter. The final member of their nine-strong family team was Gill’s dog, Tommy. Gill says, “When Keith was in the hospice, I was able to take Tommy in to see him. It felt right for Tommy to be part of the team.” 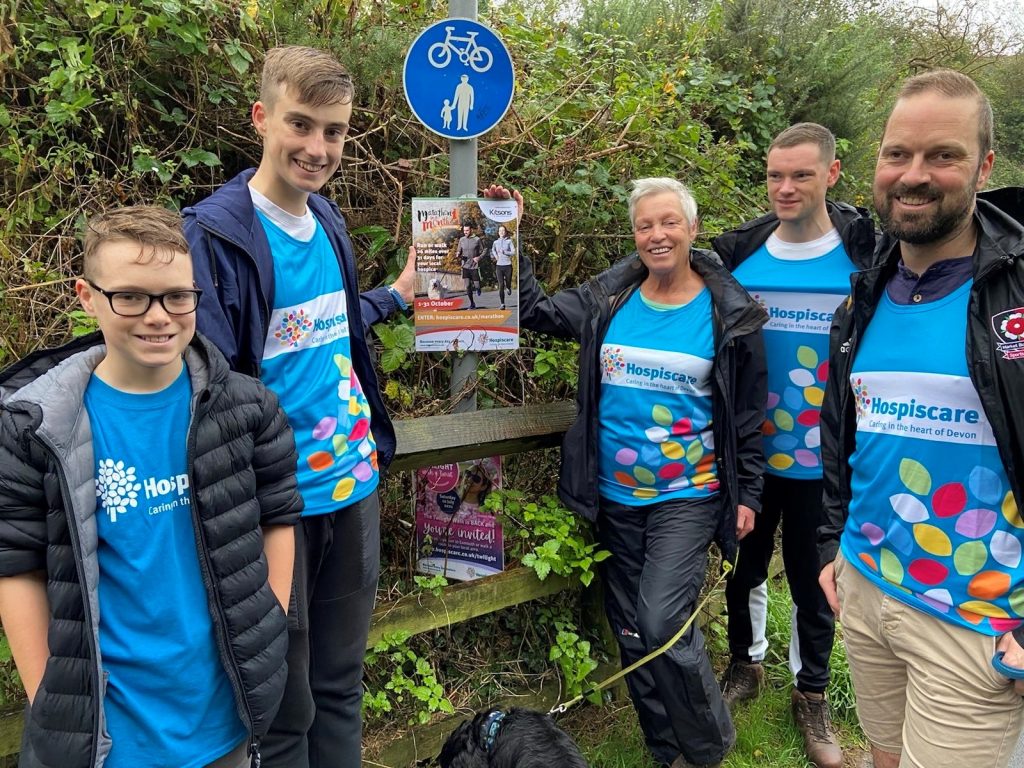 Gill’s grandsons, Ben and Harry, Gill, Gill’s son Joel and son-in-law, Mint at the beginning of their challenge

Participants in Marathon in a Month had the choice of walking, jogging or running their miles over the course of October to complete the challenge. Gill and her family chose a series of walks around Budleigh Salterton, the Otter Valley and Woodbury Common. Gill explains, “We are all walkers – it’s something we all enjoy. These routes are walks that our family has enjoyed as we did them together when Ellen, Joel and Elijah were children. We will be visiting some of Keith’s old haunts too, as well as walks we know and love.”

Gill and her family clocked up their miles over the course of the half term week, with their first walk in glorious October sunshine. Treats such as bacon butties and ice creams fuelled their challenge and distracted them all from their tired legs and feet. Gill explains, “On Tuesday 19 October, it would have been Keith’s birthday. We decided to walk from Exmouth station, along the seafront and beyond Orcombe Point towards Sandy Bay. It was very blustery but warm. Keith loved the sea, especially when it was rough, grey and wild.” 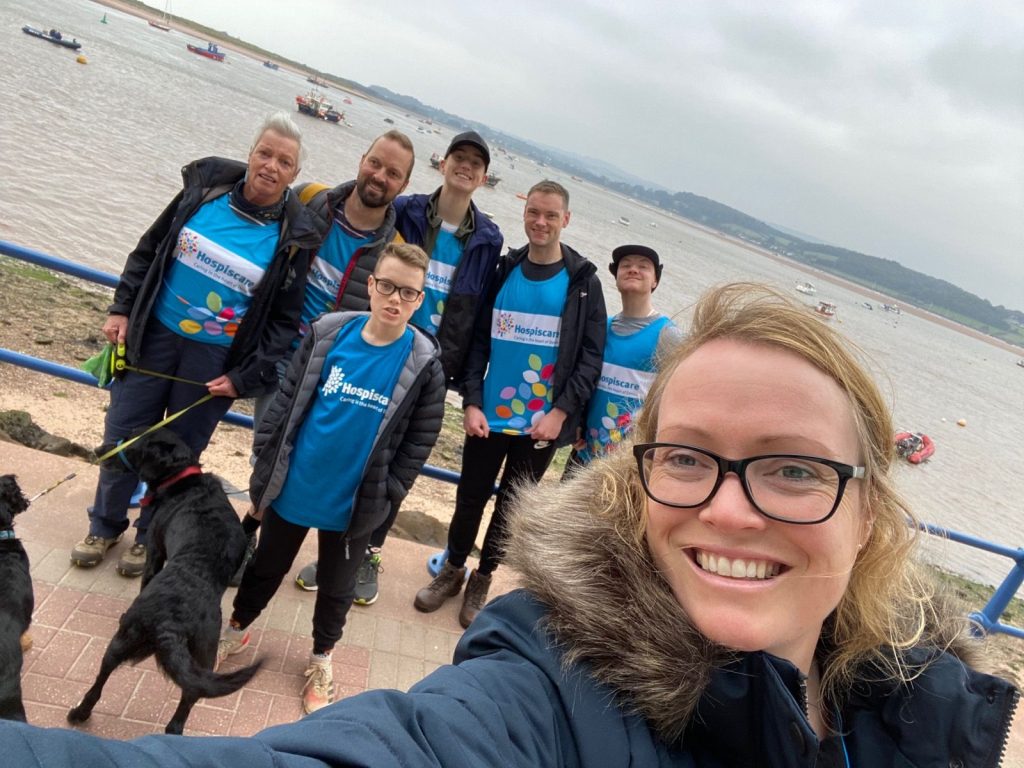 The following day, Gill and her family had just 3.5 miles left to walk in order to complete their marathon. Gill explains, “Joel was due to catch the train back to Birmingham at lunchtime and we knew that a walk from home to Ottermouth would enable us to reach our goal.

“We got up early and cracked on, even having time for a swift coffee on route. We were so pleased to finish – it has been such a positive experience to all be together, doing something as a family to honour Keith. He was loved so very much and is greatly missed. We’re so grateful to everyone who has supported us in our efforts, both financially by donating and personally, with love.” 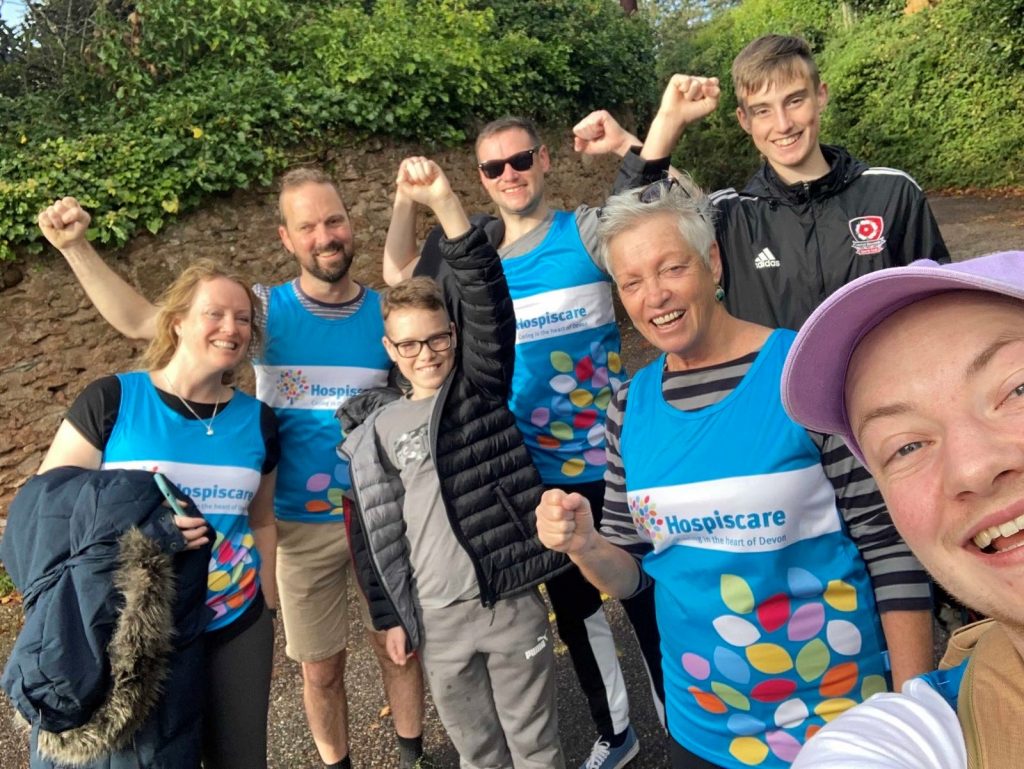 By walking in memory of Keith, Gill and her family have raised over £2,500 for our local hospice charity. Gill says, “Raising over £2,500 is a testament not only to Keith, but to the work of Hospiscare and its amazing staff. We continue to feel totally indebted to all of the staff at Hospiscare at Home and on the ward at Searle House. They all showed such unwavering commitment to Keith’s needs and wellbeing, extending that support to us at every turn.

“The care Keith had was above and beyond. Hospiscare supported us so completely – not just during that awful time, but afterwards with phone calls from their supportive care service.

“We are just so grateful to Hospiscare. They made what was an absolutely horrific time as good as it could possibly be. Hospiscare couldn’t have done anything more.”

To donate to Gill and her family’s challenge in memory of Keith, click here. 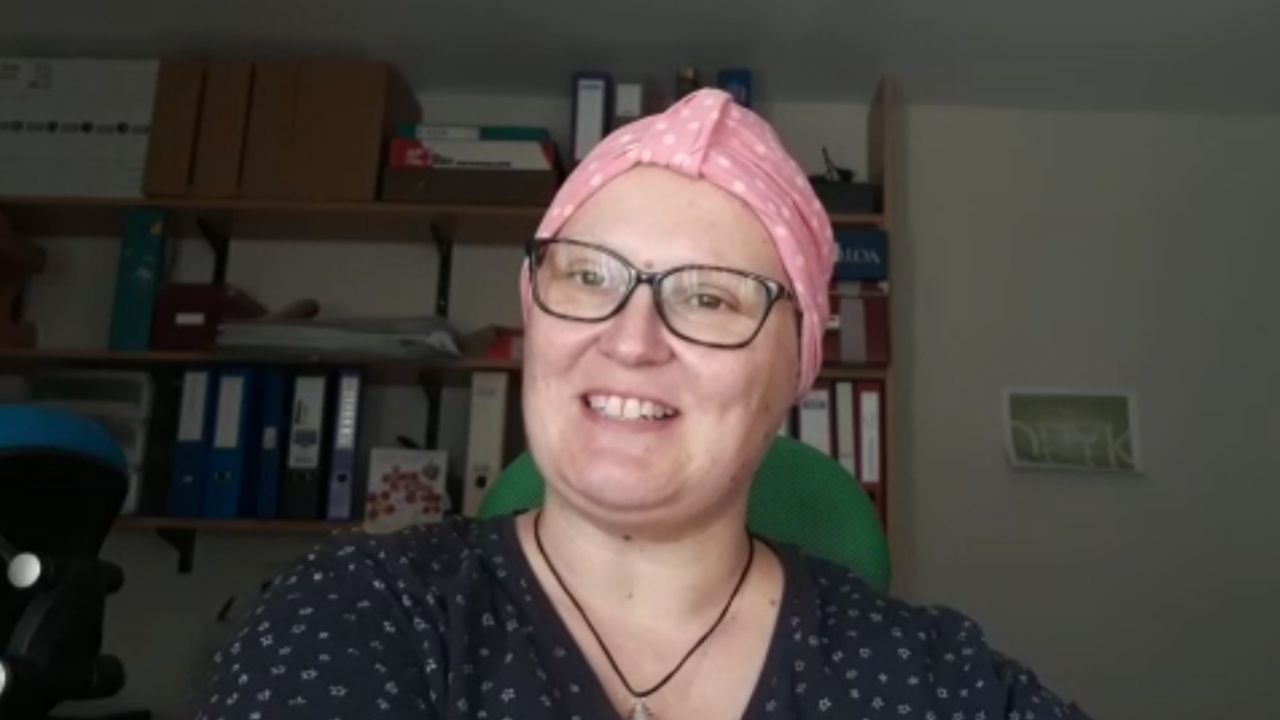 After being diagnosed with stage 4 breast cancer, Lizzie Gleaves wanted to open up the conversation around death and dying 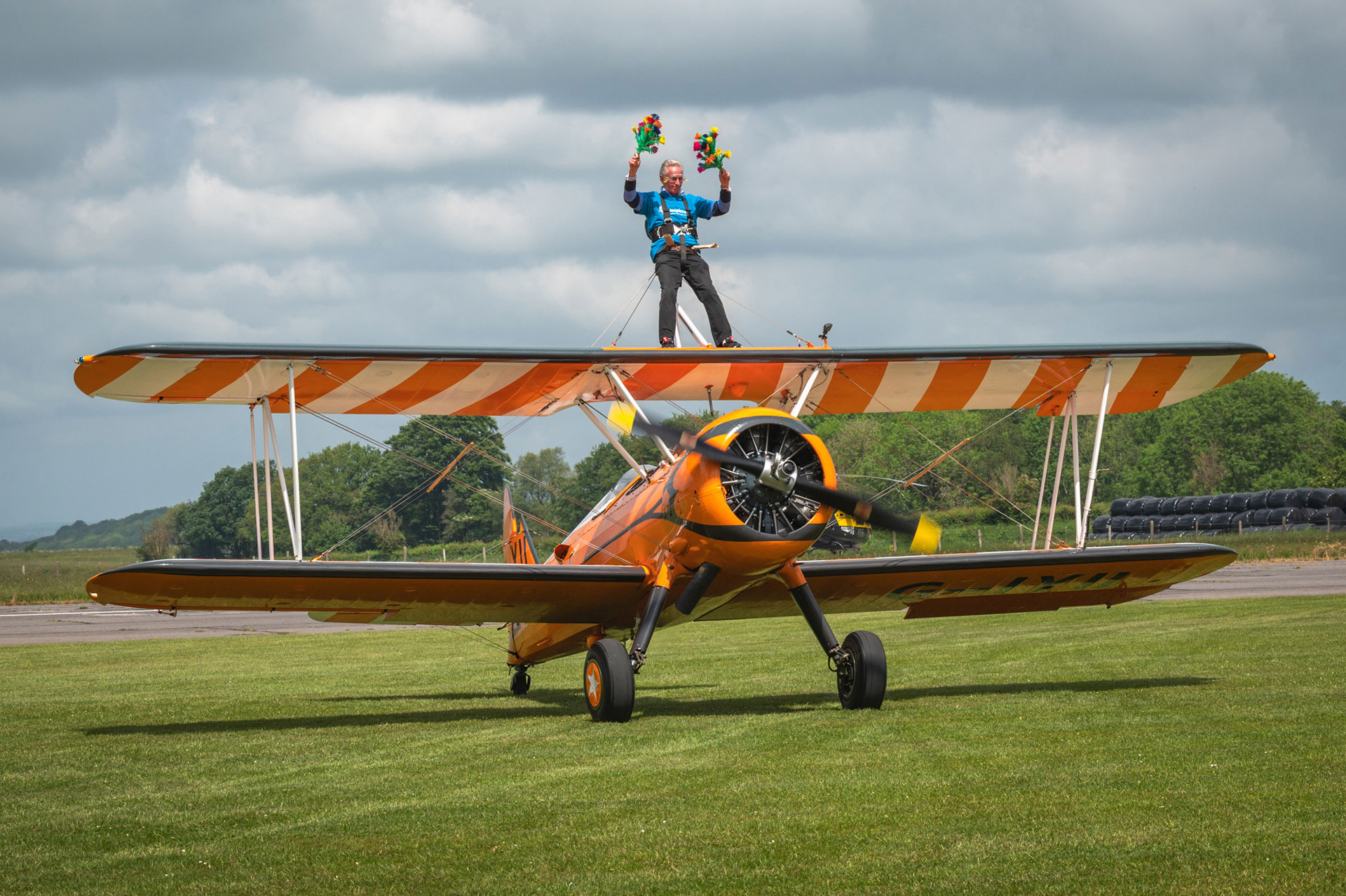