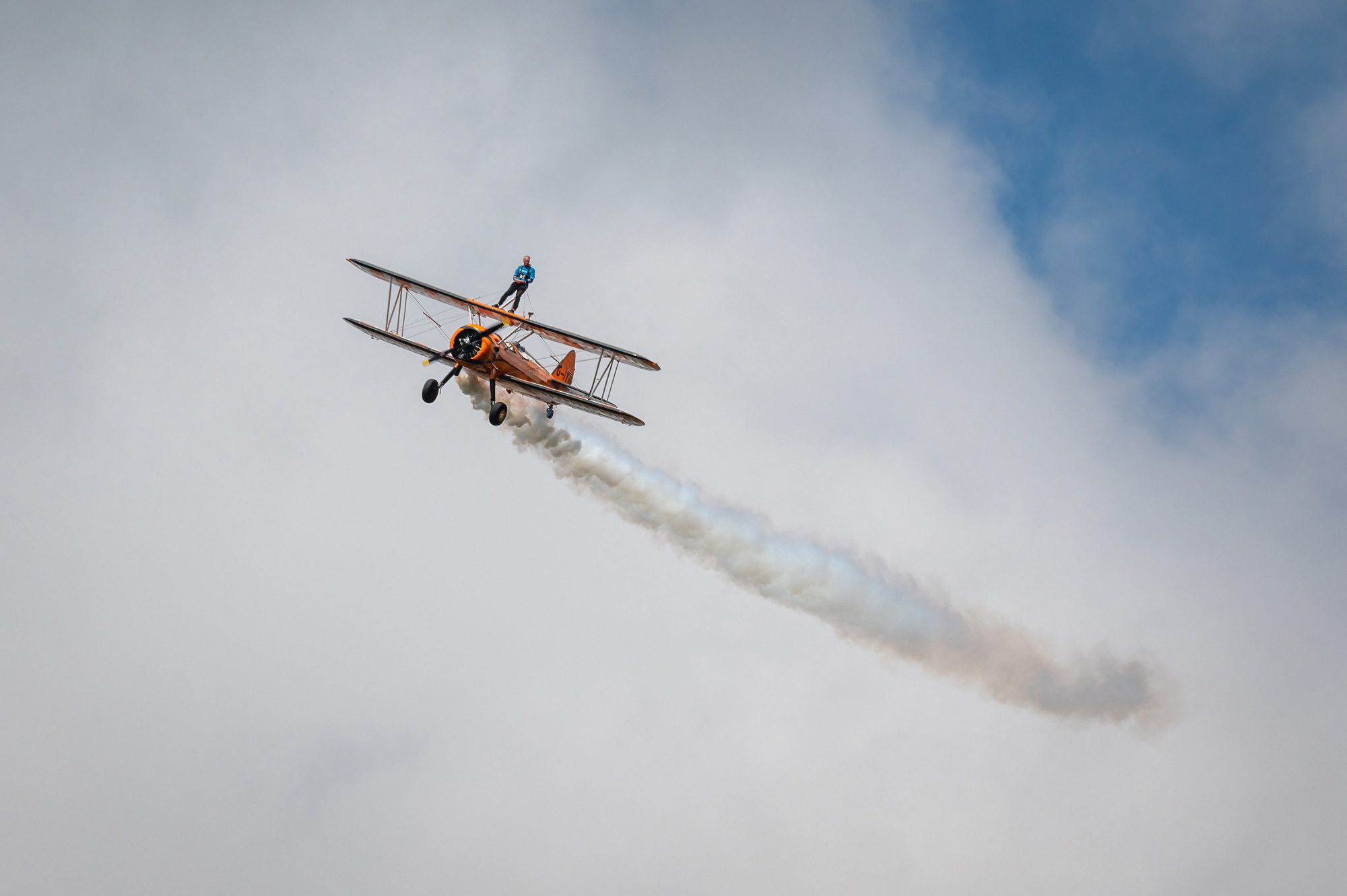 There are many ways that people choose to celebrate their birthdays and after over a year of coming in and out of lockdowns, it’s fair to say there have been some unusual alternatives to the traditional birthday party.

For his 82nd birthday, Bill Sheppard from Membury, near Axminster, decided on a truly unique celebration: three back-to-back marathons followed by a Wing Walk to raise money for our local charity. 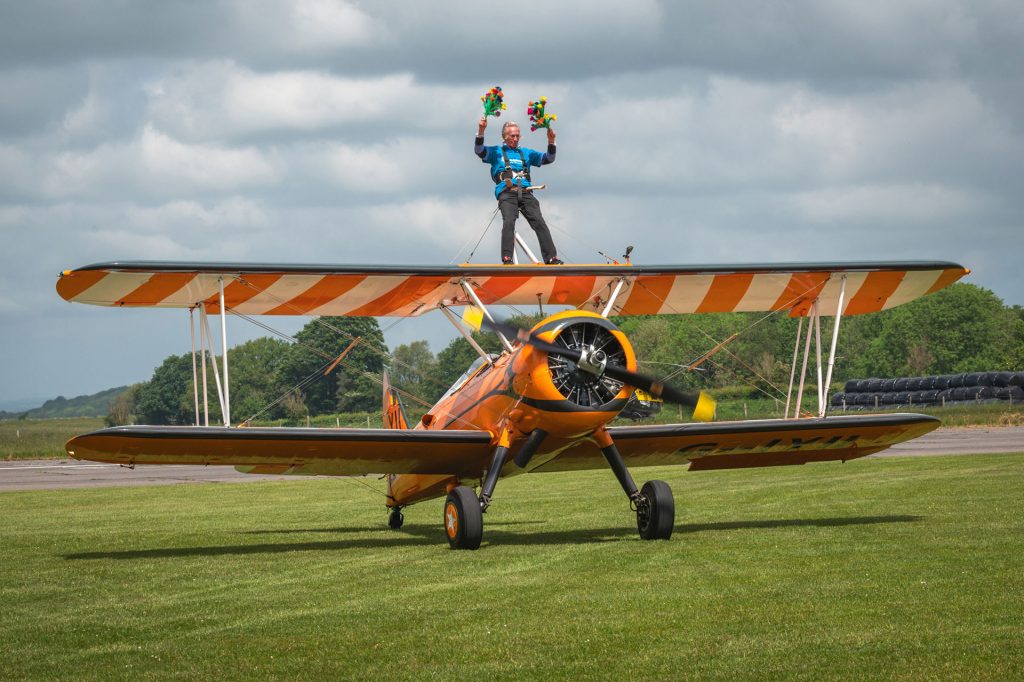 Bill coming in to land whilst performing a magic trick

Bill is fundraising for Hospiscare for a very personal reason and explains, “My wife, Anne, is terminally ill. Her expected forecast, in writing, was twelve weeks. Anne has fought these awful seven tumours in her brain and left lung and to me, she is so very brave and positive. Her courage with everyday living is phenomenal. She deserves a medal for putting up with my running and my excitement for my challenges!”

Beginning at 22:55 on 15 May, when his mother started her birthing pains, Bill ran 26 miles, followed by a 26 mile cycle and finally a 26 mile ride on his wife’s mobility scooter to complete his challenge at 08:30 on 16 May. Bill explains, “The main reason for the miles was to match my 82 years and, as you’ve probably noticed, the mileage only adds up to 78 so I walked four miles to make up the extra.

“My good friend, Ron Martin, was my security man – he kept in touch with me by walkie talkie and made sure that I had hot drinks, bars of nutty and toast with honey! Without him, I may very well have taken more breaks and not completed my marathons in less than nine hours. He was a star and a gem. I was a little saddle sore by the end but that soon went the next day when I ran a few miles again.”

Bill is no stranger to running challenges, having represented Portsmouth, Plymouth and the Royal Navy in his time. He explains, “In my thirties, when I was at my peak, I ran from Miami to Jacksonville, Florida, in four days to raise money to buy Guide Dogs for the blind. I raised enough to buy four dogs.

“My ship, HMS Falmouth, docked at Miami Clearwater and the day it set sail, I set off to beat it to Jacksonville. I raced it to Fort Lauderdale, arriving one hour after the ship docked. It was a long way.” 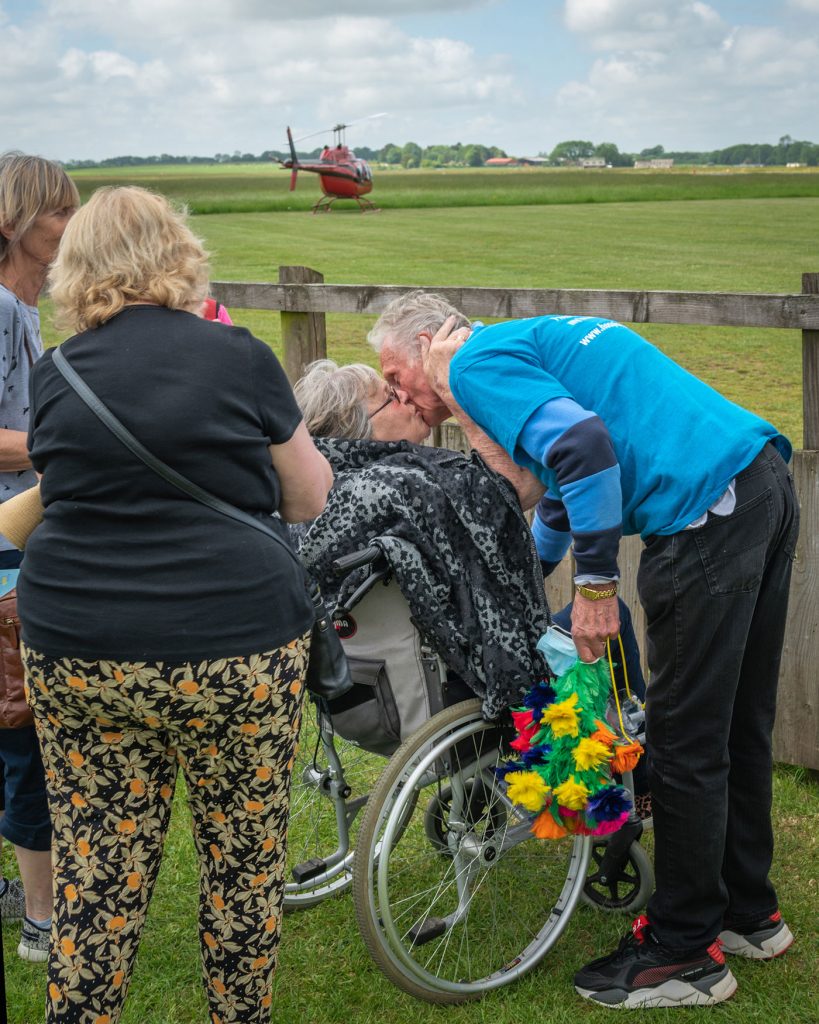 A kiss for Anne after Bill’s success in the sky

Bill took his fundraising efforts for Hospiscare one step further by completing the final leg, or perhaps wing, of his challenge 500ft up in the air. Bill took to the skies on Saturday 12 June with his wife Anne, step-daughter Kimberley and daughter Simonne, who had flown over from Portugal, cheering him on. Bill says, “With the onset of my wife’s brain cancer and Hospsicare being so good to her and me, I felt I could do a Wing Walk to raise money for them.

“My only dread was that the flight would be cancelled due to the weather so I was chuffed to bits with the forecast on Saturday.

“It was so exhilarating when the pilot climbed vertically, then nose-dived down. I was left facing the ground that was rushing up to meet me and my brain couldn’t keep up with the adrenaline rush so before I felt fear, I was climbing again. It was absolutely blood-curdling but the wow-factor was so great.”

Bill finished his Wing Walk with a final finesse harking back to his days of performing a magic act: “Our village used to do a Review for Adults Only. We did it for nine years, right up until I had a brain haemorrhage on stage.

“I used to do a magic act – things like pouring wine into a newspaper and then screwing it up and pouring the wine back out, turning milk into brandy and making cakes from water. It was all ridiculous stuff but it got laughs. I was billed as ‘Mr How Does He Do That?’.

“The flowers were always a useful trick to produce for a lady who was invited to the stage, produced from the back of the head, trousers or jacket pocket as a thank you. This is how I ended my Wing Walk – producing flowers for the pilot and for Anne to say thank you.” 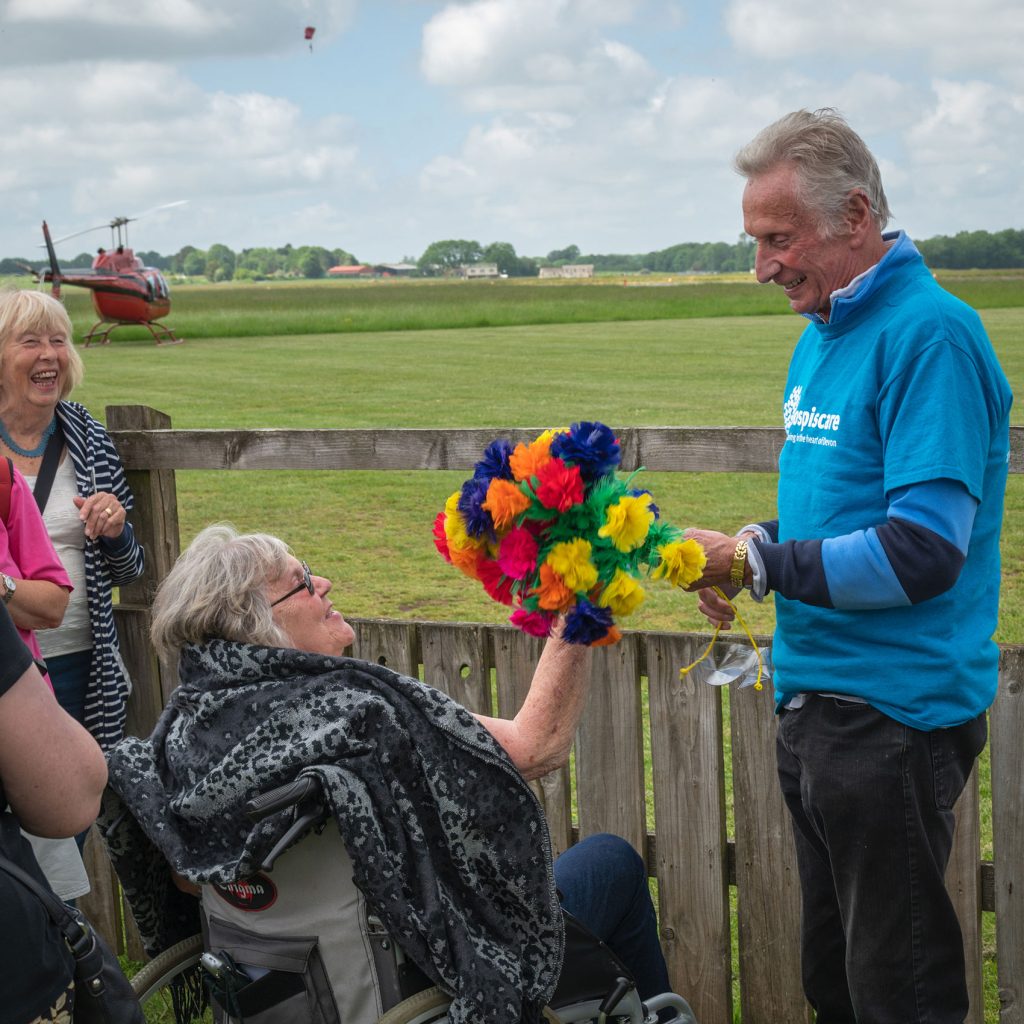 Bill’s extraordinary challenges have been met with great support from the local community, enabling him to donate £2,150 to Hospiscare. Bill says, “I am astounded and totally humbled by people’s generosity towards my chosen charity.

“Hospiscare’s nurses have been so supportive, so encouraging and so very sympathetic to us both, lending a calmness to the awful trauma that is taking place. I will never be able to thank them enough.”

To get in touch with Hospiscare and do something incredible to support end-of-life care in your community, contact fundraising@hospiscare.co.uk or call 01392 688020. 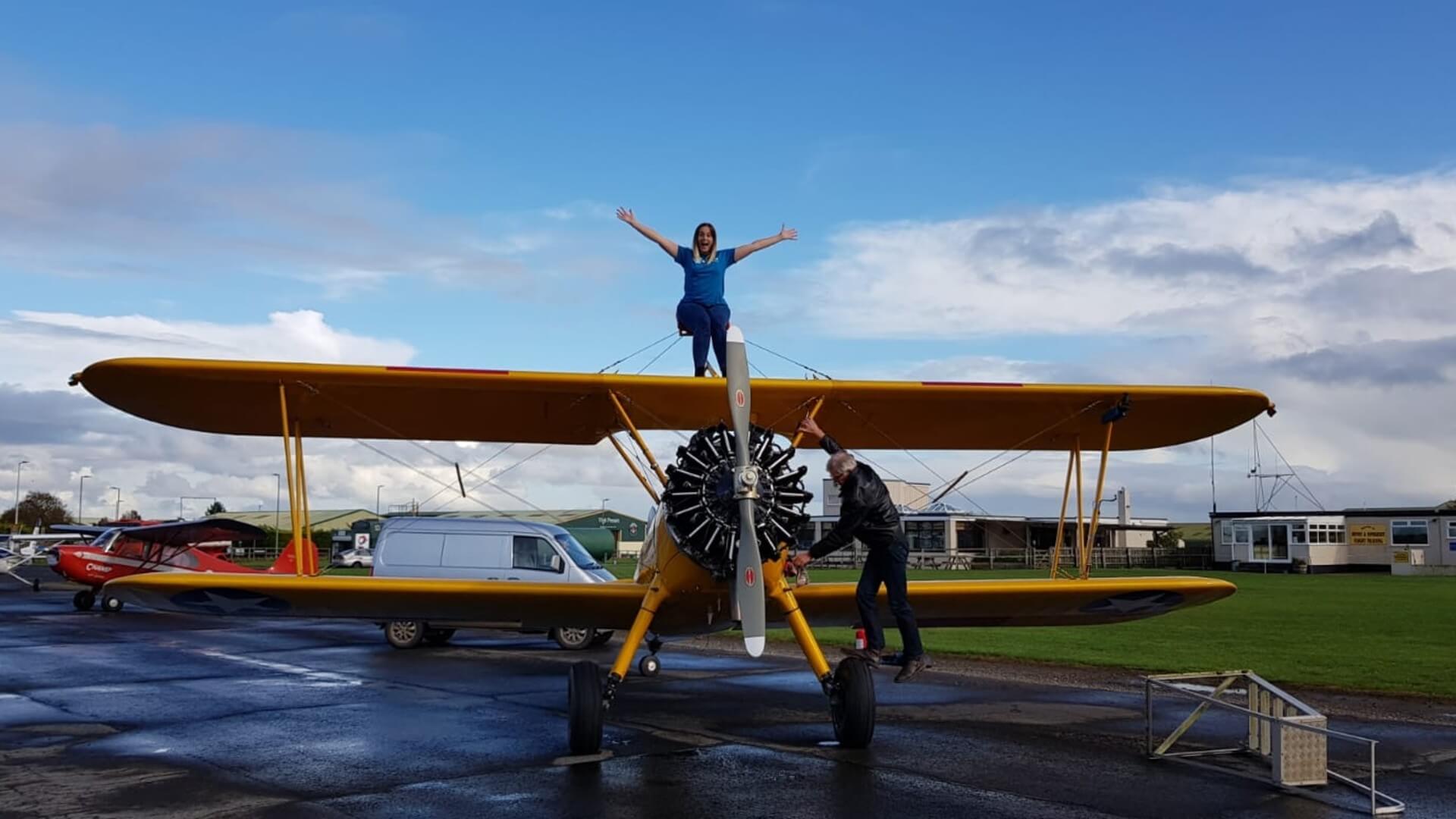 Take to the skies in aid of Hospiscare 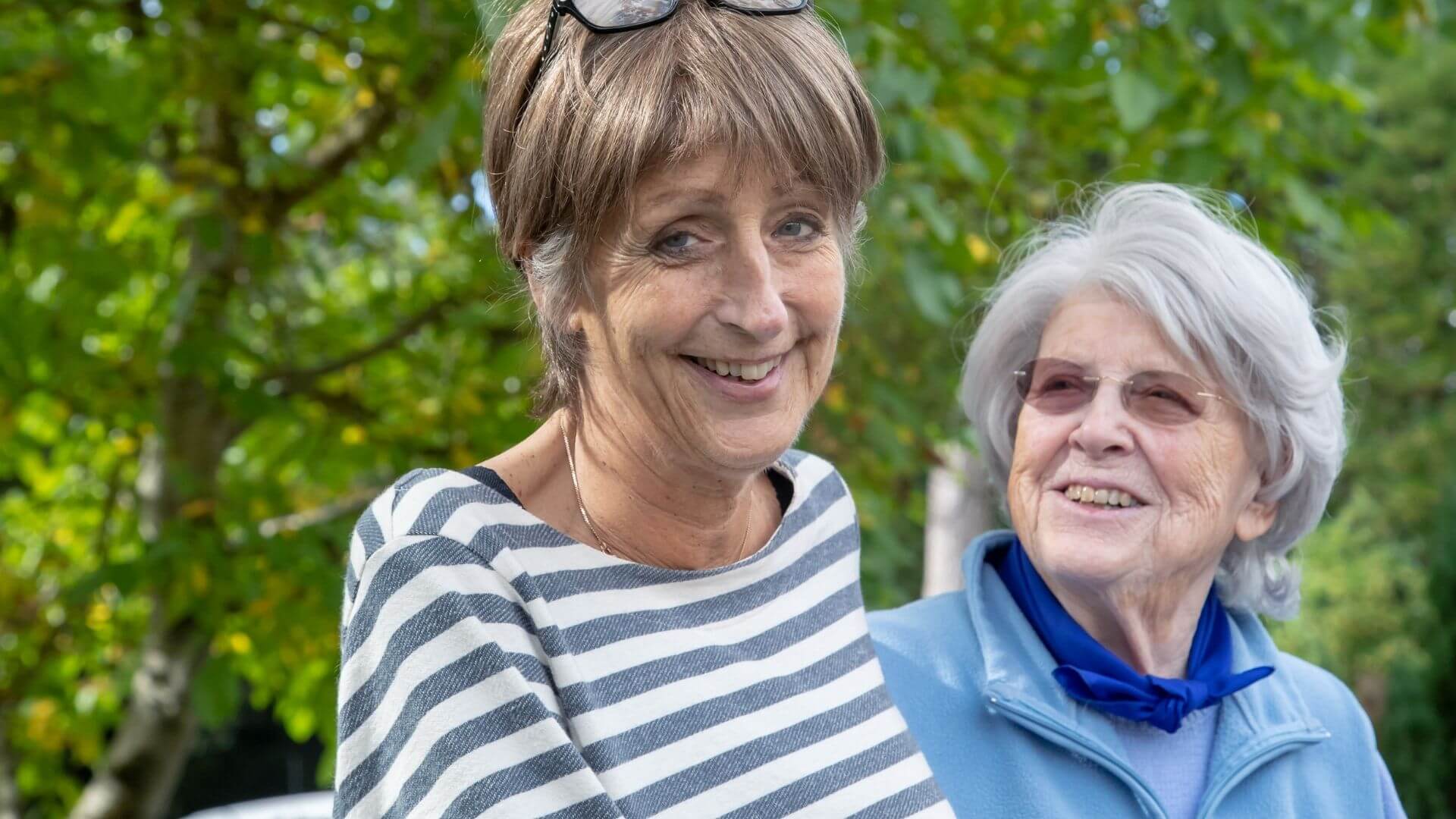 Caring for a loved one with dementia or a life-limiting illness can be challenging and you may have lots of questions and concerns. We’ve answered some common queries here. 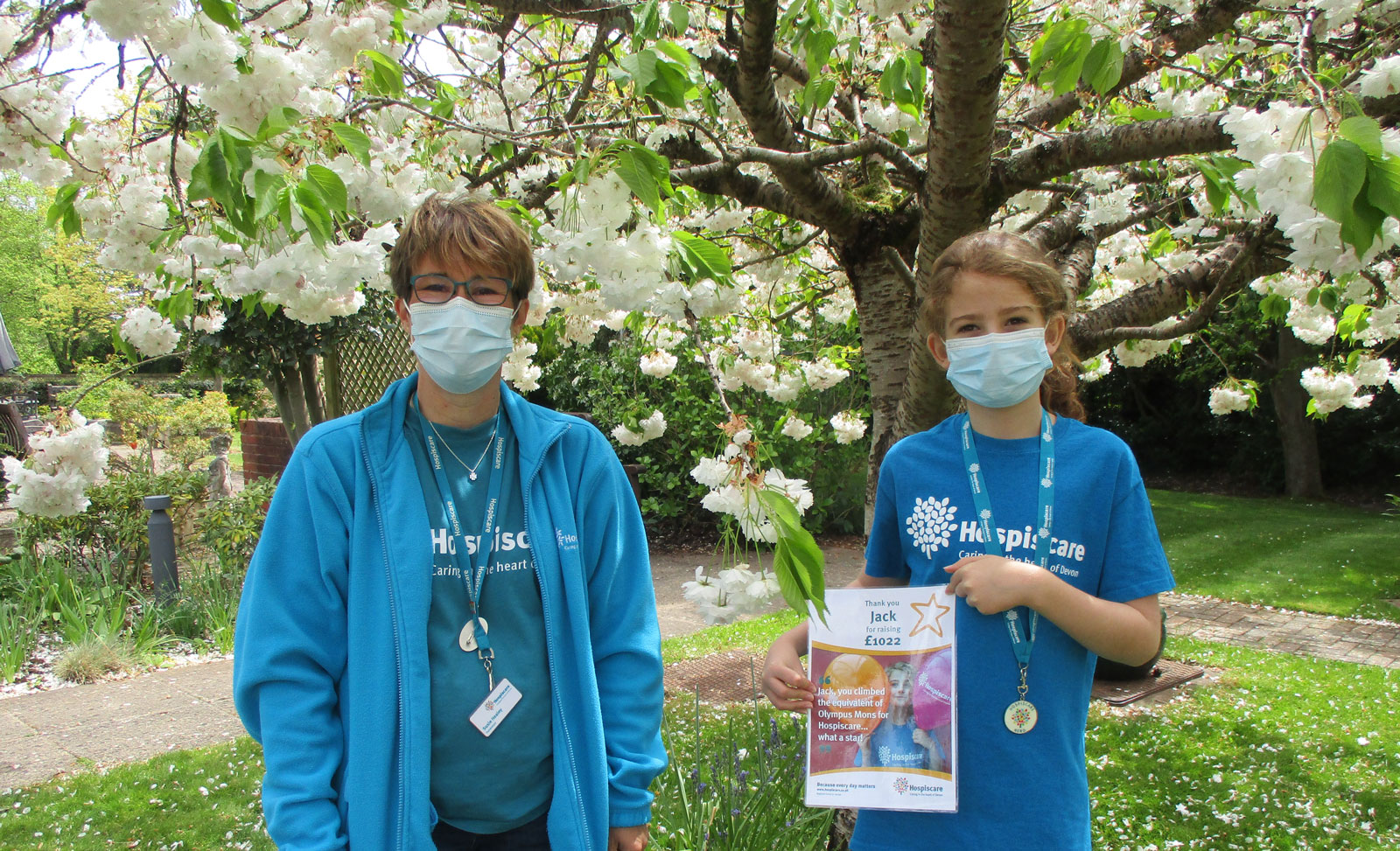 Inspired by stories of children taking on lockdown challenges, 11 year-old Jack embarked on his own step-tacular fundraising feat